Do you need help choosing a sling? Email us now on hello@calmfamily.org Dismiss

Me, on my honeymoon

In 2012 I was working at a small IT consultancy as a software developer. I worked for big multinationals and government departments writing bespoke software solutions. I had been working there since 2009 and was working my way up the ladder. My job was busy, demanding and stressful and often involved long hours. My workplace was dominated by men and I struggled in that environment.  I was recently married, and we were looking to start a family. My world seemed large to me and I felt confident in it. 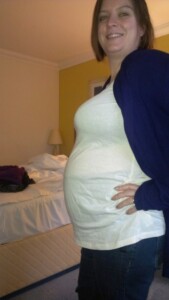 I found I was pregnant in the late summer of 2012. At first little changed. I based my research around what people reviewed well and bought that. We bought ‘the best’ books on sleep training, ‘the best’ pram and ‘the best’ car seat. I believed that I would have my baby, and head back to work after a few months. I’m not sure when my view started to shift. Near the end of my pregnancy I was keen to breastfeed. My husband had expressed a desire to carry our baby, so I’d begun to look at slings and discovered the concept of ‘ergonomic’ slings. I wanted an Ergobaby Original and insert because they were the ‘best’. My world grew a little as we got closer to the arrival of our baby. 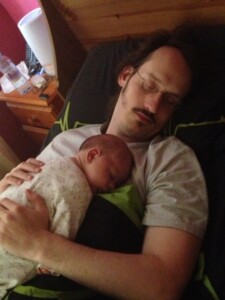 In April 2013 I had my baby boy. We had a long, difficult and traumatic labour and birth. We struggled to establish breastfeeding and I remember lying alone in hospital with my baby who wouldn’t go in the cot whilst I cried. I did a lot of googling. I arrived home in desperate need of breastfeeding support and met a local breastfeeding counsellor who expanded my world again. My baby boy only slept on me or my husband. My husband and I took it in turns to sleep. Breastfeeding was a battle I became determined to succeed at. I had no idea how I would cope. 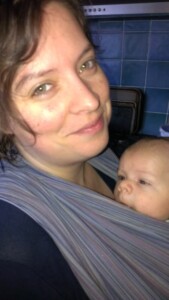 Three weeks after giving birth my new little family sat in the house of a local babywearing consultant I had found by googling. I arrived wanting anything but a wrap, but my husband loved the idea of wrapping so we both gave it a go. We both tried wrapping, and left the consultation with a hired wrap and my son sleeping peacefully on my husband’s chest. We had lunch together whilst he slept. Gaining this understanding was a profound shift for us and my world expanded again.

At 3 months old I loved carrying. I always had a sling with me. When my son wouldn’t settle in the pram or in bed I carried him. I showed other people my wrap and watched other friends start carrying. My world expanded again. 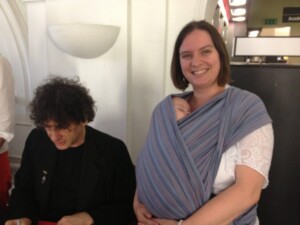 We even went to meet Neil Gaiman!

At 6 months old the people I had met via the slings and breastfeeding group had given me the confidence to look elsewhere for advice. I was understanding more and more about how children worked and developed. We began co-sleeping and everyone got more sleep. My world expanded again.

At 9 months old we no longer used a pram and began exploring new and interesting slings. I tried a whole host of wraps and carriers and fell in love with some more than others. I went back to work and realised that I was no longer happy in the corporate environment. The online sling groups I found expanded my world again. 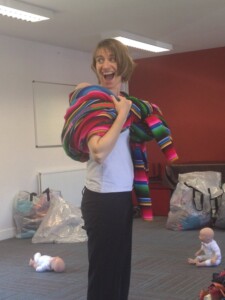 At 13 months post partum I trained as a sling consultant with Slingababy. Lorette didn’t expand my world she blew it wide open. She taught me so much about how to be a better human and a better mum that the slings were almost an afterthought. She listened and loved and showed us how to empower parents, to hold space, to offer love not judgement. Slingababy fundamentally changed my understanding of the world and set me on a path of rediscovering myself and my own values. I found a family and a support network I didn’t know I needed. My world expanded more. 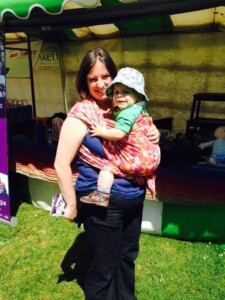 I began a local sling library in Coventry in 2014. In 2 years I had undergone a profound shift in myself and my world. I was still working part time as a software developer but I was unhappy with the environment and with the focus of my career. Through the sling library I met parents from all walks of life. I met parents that months before I would have judged or made assumptions about and working with them opened my eyes. I began to learn to let go of the judgements I was holding about my own life. My world expanded again.
I found out I was pregnant again soon after, and when I was around 4 months pregnant a woman arrived at my sling library who would change my life. Jenni was one of the kindest and most generous people I had met in my life, someone who immediately stepped in to help those around her. She supported me during 2014 and 2015 as I moved house and then had my baby, and I supported her first with slings, then as a fellow mum and friend. Since then we have supported one another through two house moves, two babies, two family bereavements, various family issues, mental health issues and more. We have become family. She expanded my world again.

In 2017 Jenni and I took over It’s A Sling Thing. We have met so many people and tried so many different things in the last year it feels like we haven’t stopped. We have learned a huge amount about business, slings and ourselves. Our worlds have grown again.
In 2012 I was a very different person to the one I am today. My world was smaller. My experiences have shaped me, my children have shaped me, and my world has grown. In a very real and very tangible way slings have shaped me and changed my life. 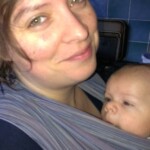 It’s A Sling Thing grows out of this. Slings changed my life. Slings saved my sanity, they gave me hands back, they allowed me to be physically active, they allowed me to cope with two children under 2, they brought me friends and family and comfort and joy. It is more than JUST slings, it is something I can give back to other families. I can help their worlds grow. 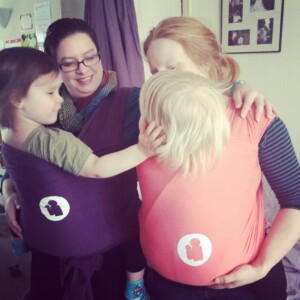 Spotlight on the Ergobaby 360

Why More Than Just Slings?